The slang varies from city to city, often influenced by the local dialects. For example in Jakarta, it tends to be influenced by the English language or Batavian dialect (old name of “Jakarta” during the Dutch colonial period) or in Bandung, the slang contains vocabulary from the Sundanese language (dialect spoken in West Java). Although it’s widely used in daily conversations, it’s uncommon to find Indonesian slang in formal texts such as national newspapers, magazines and other formal correspondences which emphasize on the usage of “good and correct” Indonesian (“Bahasa Indonesia yang baik dan benar”).

Below we will learn some of the slang we often use in daily conversations. Click on the image below. 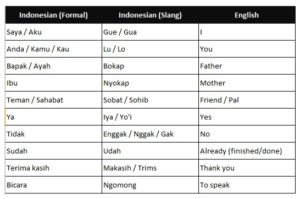